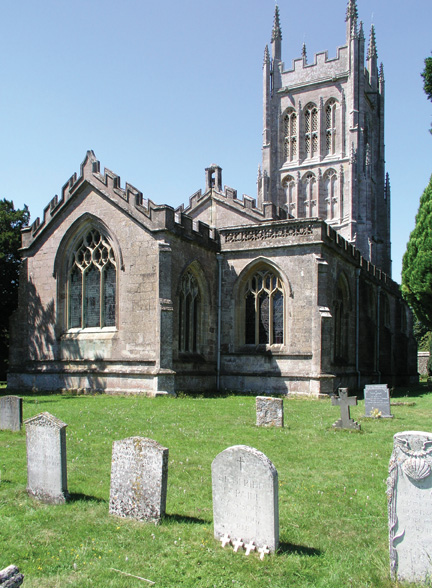 Arriving in this tranquil Wiltshire village, visitors can hardly fail to feel as though they have stepped back in time: to a simpler, more peaceful age where leafy lanes and Bath Stone cottages abound. The village war memorial gives the first clues as to the wealth of interest that lies in store. The memorial itself is of unusual design – a Tuscan column surmounted by the figure of St George slaying the dragon. This, in common with many other pieces in the village is the work of the architect Edwin Lutyens.

The first name on the memorial to those who died in the 1914-1918 conflict is that of Raymond Asquith, the son of the Prime Minister Herbert Asquith who held office between 1908 and 1916. Raymond Asquith had, in 1907, married Katharine Horner, whose family lived at Mells Manor, near to the church. Raymond, a war poet himself, saw service with the Grenadier Guards and was killed on 15th September 1916, during the Battle of the Somme. A week later, fellow poet Edward ‘Bim’ Tennant was also killed and the two men are buried near the entrance to the Guillemont Road Cemetary. Asquith’s is the first of fourteen names on this memorial, which also includes that of Edward Horner, his brother-in-law and heir to the Mells estate.

Within the church itself are further reminders of the village’s losses during the World Wars. Among these a plaque commemorating the dead can be found on the wall together with a memorial to Raymond Asquith which takes the form of a Latin inscription and a bronze laurel wreath, also designed by Lutyens. The Latin translates as follows:

In loving memory of Raymond Asquith
Scholar of Winchester College and Balliol College Fellow of All Souls College
Who was destined by the hopes and desires of his contemporaries
To win all the rewards of intellectual talent and virtue.
In the middle of the flower of his life
He took up arms for his native-land and died fighting bravely.
A distant and friendly land holds him now he is dead.
His family and friends mourn him with unrequited longing.
Born on the 6th of November 1878, died on the 15th September 1915.

The Horner Chapel houses further reminders of the human cost of the First World War. Dominating this room is an equestrian statue dedicated to Edward Horner and near the window there is also a wooden tablet which bears the inscription:

LIEUTENANT IN THE EIGHTEENTH HUSSARS

HE WAS GREATLY LOVED IN HIS HOME AT MELLS BUT WITH EAGER VALOUR HE LEFT HIS HERITAGE AT THE OUTBREAK OF WAR TO FIGHT IN FRANCE. SEVERELY WOUNDED AT YPRES HE RECOVERED AND RETURNED TO HIS REGIMENT AND FELL AT LAST IN PICARDY WHILST DEFENDING THE VILLAGE OF NOYELLES AGAINST THE GERMAN ARMY IN THE BATTLE OF CAMBRAI. THUS IN THE MORNING OF HIS YOUTH HE HASTENED TO REJOIN HIS FRIENDS AND COMRADES BY A SWIFT AND NOBLE DEATH.

HIS GRAVE IS AT FINS NEAR ETRECOURT AND HIS ONLY BROTHER MARK IS BURIED IN THIS CHURCHYARD. IN THEIR LIVES THEY WERE THE LOVE OF MANY AND HAVING DIED THEY ARE NOT DEAD.

The long-term effects on the Horner and Asquith families of these two deaths mirror those felt by families throughout the country. In common with many of the fallen, these two men are buried near where they died in France, but their original wooden grave markers have been brought back to Mells and are in the Horner Chapel – slivers of history which bring the horror of the war to life in an evocative and thought-provoking manner.

In the graveyard lie many members of the Horner family, including Raymond’s widow, Katharine and her parents, Sir John and Lady Frances Horner. In addition, one can also see the graves of Helen Violet Asquith, who went by her middle name, and her husband Sir Maurice Bonham-Carter. Set in amongst these family headstones is one belonging to the Ronald Knox, a Catholic preacher and writer who had spent the last few years of his life living in Mells. 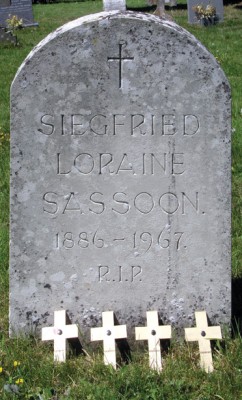 Just a few yards away from Monseigneur Knox’s grave lies that of Siegfried Sassoon. The headstone is plain and simple.

During his life, Sassoon had been well acquainted with Katharine Asquith, frequently visiting Mells. In addition, he had spent a great deal of time at nearby Wilsford, the family home of Stephen Tennant. In 1934 he bought Heytesbury – a large house and estate in the village of the same name – which lies some 20 miles from Mells, and lived there until his death. Therefore, his love for this part of the country, together with his association with the Horner family might be seen as a reason for his choice of burial site. However, the real reason lies in his desire to be buried near Ronald Knox, who had helped and advised him during his conversion to Catholicism in 1957, which was only achieved days before Knox’s death.

Sitting in the shade of a huge Yew tree in the graveyard, one has time to reflect on an apt resting-place for a man who spent most of his life searching for peace. Surrounded by friends, Knox in particular, in a beautiful, tranquil, English village churchyard, one can almost imagine the satisfied smile on his face. As in his life, though, he can never quite escape his memories of the First World War – nor would he wish to.