A visit to… Steep 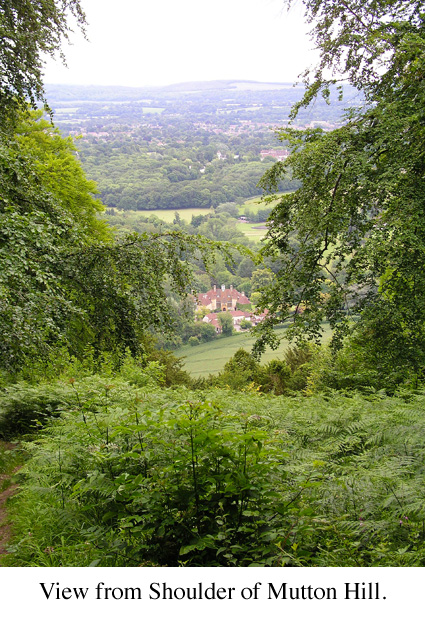 Taking the Edward Thomas walk in the area immediately surrounding the village of Steep, near Petersfield in Hampshire, it is quite easy to see why the poet fell in love with this corner of England. He was renowned for temporarily absconding from the family home, in order to soak up the atmosphere in the countryside.

Although the weather prevented us from completing the entire walk, the parts that we did see were spectacular. The Edward Thomas memorial stone on Shoulder of Mutton Hill is well worth the steep descent from Cockshott Lane, affording as it does, a magnificent view of the South Downs, and the glimpses of the houses in which Thomas lived during his short residence in this village offer an insight into his lifestyle. The walk also takes in the village memorial and All Saint’s Church.

The church of All Saint’s in Steep dates back to the 12th century, although there are many later additions. It originally came under the curacy of East Meon in the Winchester diocese until 1867 when Steep became a parish in its own right and then in 1927 it fell under the diocese of Portsmouth.

Inside this small but beautiful church there are several memorials to local people including a war memorial plaque on the north wall, which includes the names of those connected to the village who fell during the First World War, including Edward Thomas. There is also a window in the South Wall, designed and engraved by Laurence Whistler in 1978 to mark the centenary of Thomas’s birth. There were originally two windows (the second one showing an engraving of Thomas’s poem The New House), but this was shattered in 2010 as an act of vandalism, during a break-in. 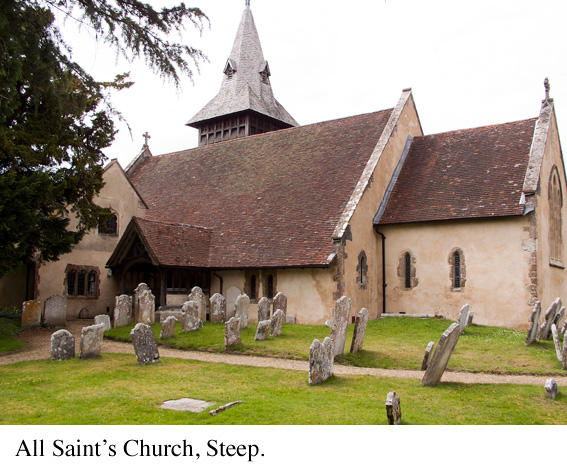 Like many small villages in Great Britain, Steep has its fair share of war dead to commemorate. Within the graveyard of All Saint’s Church there are six graves from the First World War, all of which are listed by the Commonwealth War Graves Commission. The men interred all died on English soil for various reasons, while in the service of their country. These are their stories (with additional research, where available):

William George APPLEBEE
(14.10.1901 – 29.10.1918)
William was the second of four children of Henry and Martha (née Gregory) who lived at Tigwell Farm, East Meon, Petersfield, Hampshire. William enlisted in the Royal Navy at Portsmouth as a “Boy, Second Class” on 11th September, serving aboard HMS Impregnable. He died on 29th October 1918 at Plymouth in Devon.

Adam BOGLE
(1848 – 3.3.1915)
A native of Glasgow, Adam Bogle was a career soldier, joining the Royal Engineers in 1868 at the age of 20. He rose through the ranks, becoming a Lieutenant by 1879, Captain by 1881 and a Major ten years later. He married Ethel Glossop in 1882 and they lived at a house called “Collyers” at Petersfield in Hampshire. When Major Bogle died, he left his wife the substantial sum of £26,000 (probably worth nearly £2m today).

William Thomas REED
(1900 – 18.10.1918)
The second of the three children of John and Emma (née Mills), who lived at Island Farm in Steep, Hampshire. William was an Ordinary Seaman aboard HMS Vivid.

David Ewan McCONNEL
(15.4.1900 – 7.12.1918)
Born in Queensland, Australia, the son of teacher David Rose McConnel and Mary Emma (née Jordan). The family including David’s older brother, moved to the USA in 1910, where David attended the Palo Alto Elementary School, before they relocated to Switzerland and then to England, arriving in Hampshire in 1914. David attended Bedales School near Steep, where he became head boy. He joined the Royal Flying Corps (later the Royal Air Force) in March 1918, earning his wings on December 7th. Later that day, he was tasked with delivering an aircraft and was killed while landing in foggy conditions.

Charles Ernest LILLEYWHITE
(1877 – 14.12.1915)
Charles was the youngest of the seven children of gamekeeper William Lilleywhite and his wife Charlotte. He grew up at Thursley in Surrey, but after his marriage to Elizabeth Mansell in June 1902, moved to Gardners Farm, Steep near Petersfield, where he too worked as a gamekeeper. Charles and Elizabeth had two children, Harold and Barbara before Charles enlisted in the Hampshire Regiment, despite being officially too old. Charles died in England on December 14th 1915.

Oswald HORSLEY MC and Bar
(14.2.1893 – 19.8.1918)
Oswald was the second son and middle child of Sir Victor Alexander Haden Horsley and his wife Eldred (née Bramwell). Sir Victor Horsley, a physician, was the son of John Callcott Horsley RA, artist and the designer of the first Christmas card, as well as the nephew by marriage of Isambard Kingdom Brunel; his wife, Eldred was the daughter of Sir Frederick Bramwell, a civil servant and mechanical engineer. At the beginning of the First World War, Sir Victor, keen to serve his country, volunteered as a surgeon and was sent as a Colonel and Director of Surgery to the British Army Medical Service in Egypt. From here, he was sent on to Mesopotamia, where he died on 16th July 1916 of heatstroke. Oswald, meanwhile, began his war service on 3rd August 1914 when he joined the Artist’s Rifles, being awarded a commission with the Gordon Highlanders. He served at the front throughout 1915-1916, and was awarded his first MC in October 1916, the citation for which read as follows: “For conspicuous gallantry in action. He led the first line of the advance, capturing and consolidating his objective. Though wounded and put into a shell-hole, he continued to direct operations and refused to be moved back till the position was safe.” During his time at the front he was wounded three times, the third time being so severe that he was no longer able to continue serving with the infantry, so he transferred to the Royal Flying Corps in August 1917. Once Oswald had earned his wings, that December, he remained on the Western Front for the next six months, undertaking many dangerous sorties, as a result of which he earned a second Military Cross, which was gazetted on 22nd June 1918 and read as follows: “For conspicuous gallantry and devotion to duty. He has brought down completely out of control three hostile machines, and of two others which he engaged one he fought to within a distance of 200 feet from the ground, forcing it to land, the second spinning down to the ground out of control, he being unable to observe it crash owing to the presence of other hostile machines. He has carried out accurate and valuable reconnaissances, and has set a magnificent example of determined gallantry and skill whilst leading low-flying and bombing patrols.” By now promoted to Captain, Horsley was placed on the relatively safe “home establishment” in July 1918, where he was killed in a crash on August 19th, together with his observer, caused by mechanical failure.