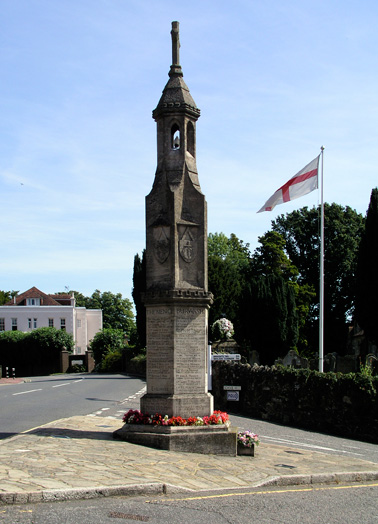 The village of Burwash may well date back to the 11th Century, and certainly the church which stands at its heart, The Church of St Bartholomew, was built in 1090. Over the ensuing centuries, this picturesque market town expanded, until by the mid-eighteenth century, it housed over fifty shops, which continued to thrive until the improvements in transportation during the Victorian times, allowed people to travel further afield.

Now, although some shops remain, it is a mainly residential village, boasting several pubs, a few shops and some very pretty houses.

Outside the church stands the village war memorial, unveiled in 1920. Beneath the cross at the top of the memorial is a light, which is lit on the anniversary of the death of each of the men commemorated. The memorial features the names of sixty-three local men, including John Kipling, who gave their lives during the First World War, together with fourteen from the 1939-1945 conflict. 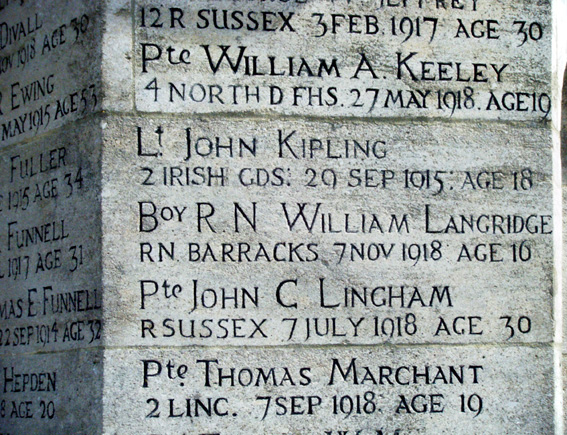 Many of the names on this memorial are repeated. For example, there are three men with the surname of Pennells, Hepden, and Funnell, and two named Mepham, Hope, Dann and Brook, showing that the First World War had an enormous impact on the families living in this small village.

In the Church itself, there is a second memorial tablet which records the same names, as well as an oval bronze plaque which commemorates the death of John Kipling. This was the first commercial work undertaken by Charles Wheeler, who went on to become President of the Royal Academy of Arts. During the war, Wheeler was deemed unfit to serve and worked, instead on modelling artificial limbs for amputees.

In the churchyard, there stand several Commonwealth War Graves Commission headstones, distinctive in their uniformity. These mark the burial spot of some of the men from both world wars who were, presumably, wounded on the field of battle and died later, having been transferred back to England.