Letters from the Trenches – A Soldier of the Great War 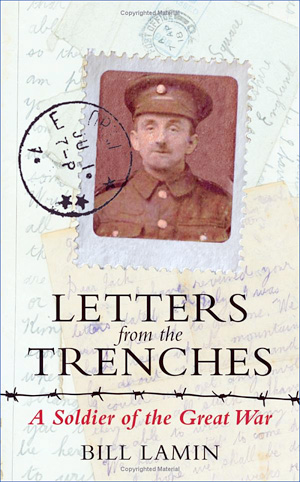 The death of the “Last Fighting Tommy” Harry Patch, has led to the genre of First World War diaries, letters and first-hand accounts receiving even greater attention in the media, in published book form and on the internet. This particular title has scored on all three fronts.

Letters from the Trenches started life as a “blog”, when Bill Lamin decided to publish his grandfather, Harry’s, letters from the front on the internet, 90 years to the day after they were first written. Those reading the installments, had no idea as to Harry Lamin’s fate and, during the frequent gaps in correspondence, could easily begin to believe that Harry had been wounded, or even killed. This was an ingenious method of using modern, accessible technology to recreate the circumstances which many families faced during the First World War. The blog became popular in its own right, attracting interest from all over the world and gained some media attention. Now it has become a book… which by definition, is a very different beast.

This book, of around two hundred pages, contains nearly ninety letters from Harry, most of which occur in the second half of the narrative, when Harry was serving on the Italian front, or after the conflict had finished, but before he was demobilised. The remainder of the book is filled with extracts from the Battalion War Diary and background information and commentary, both on the war itself and also on the content and context of Harry’s letters. Unfortunately, this narrative is a little disorganised for my liking, necessitating a frequency of page-turning and re-reading, which I found, frankly, too wearisome a task to continue.

The content of the book is also necessarily restricted by the letters which Bill Lamin had available, namely those written by Harry to his brother Jack and sister, Kate. Unfortunately, Harry’s wife destroyed all of the correspondence between herself and her husband and there are none which had been sent to Harry by his relations. Reflecting the frequent monotony of life in the trenches, together with the fact that the letters are written to more than one person, they can become a little repetitive, not helped by Bill Lamin using quotations and excerpts from the letters in his narrative. This means it can frequently feel as though you are reading the same thing over and over again, which sadly becomes rather mundane after a while.

Given the current surfeit of books containing letters and diaries from the conflict, one is always looking for something a little different; something singular, esoteric or even recherché perhaps. Bill Lamin may have achieved that in the blog, which I feel was an inspired way of bringing the letters and their content to life, but whether this has translated into book form is debatable.