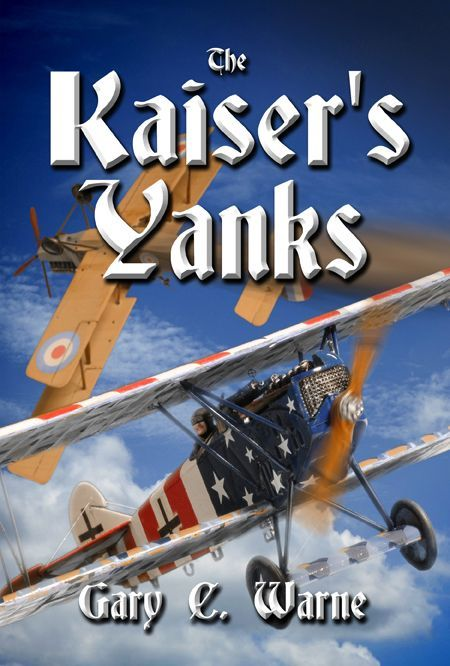 As the centenary of the First World War approaches, that topic and its participants seem to be providing a rich source of material for authors and writers alike (not to mention dramatists, screenwriters, film-makers etc). I was, therefore, not surprised to receive a request from Gary Warne, the author of The Kaiser’s Yanks, to review his novel, and its arrival in the post from Florida was certainly greeted with excitement, as the cover tells of wondrous deeds of heroism in the skies over the battlefields of the Great War.

Written as a “what if” novel, the surmise here is that a group of young Americans choose to service with the German Air Force during the First World War, eventually being formed into their own squadron, namely Jasta von Steuben. The story, tells of their exploits, from leaving their homes to journeying across the Atlantic and making their way across Europe into the enthusiasm of the early days of war. I will not spoil the story for those who wish to read The Kaiser’s Yanks, by revealing any of the plot, suffice to say there’s plenty to keep the air enthusiast entertained. The novel was probably not written for the UK market, given its stance that all of the Allies were pompous, arrogant and uncaring, while the American heroes of the book and the Germans with whom they fought were nothing short of boys’ own heroes! This is hardly a balanced perspective, and not at all accurate of most air force personnel during the conflict.

Gary Warne has, for the best part, done his homework as regards the technical details included within the novel. However, this is a story, not a text book and it does fall very short on characterisation, which in depth and background are sadly lacking. There are many characters involved within the plot, but I didn’t really feel that I knew them any better at the end of the story than I did at the beginning. Additionally, some of the set pieces and “famous” character inclusions are a little obvious or contrived, which makes the whole novel rather more slow-paced than I had expected. For me, however, the greatest disappointment was the lack of emotion portrayed within the novel. There are many scenes of aerial combat, several crashes and a few deaths, but at no point did I really understand how the characters actually felt about what they were doing and in my experience of Great War literature, this is one of the most fundamental aspects.

Nonetheless, I cannot say I didn’t enjoy The Kaiser’s Yanks and it certainly had its moments. It’s not unreasonable to suppose that first and second generation German-Americans would choose to fight for the country where their parents were born. It’s also not unreasonable to expect the author to spell the name of one of his central characters in the same way throughout. It is very frustrating, therefore, that on the same page, the name “Josef” changes to “Joseph” on more than one occasion.

This is evidently a self-published book, which in terms of spelling and grammar (even allowing for the American-English) would need to undergo a major edit before being mainstream published.