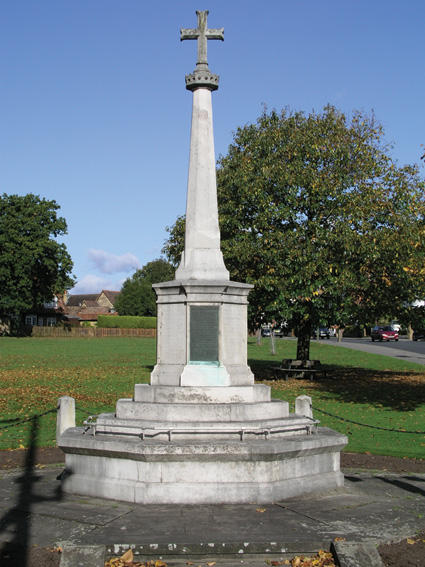 The war memorial at Esher in Surrey, stands on the Green near to Christ Church, a Victorian Gothic building whose tall spire dominates the surroundings.

It takes the form of a simple stone cross, mounted on an octagonal tapering column. This stands on an octagonal plinth, which bears the names and inscriptions of the local men who gave their lives during both World Wars.

The names of sixty-nine First World War combatants are inscribed on bronze plaques on four alternate sides of the plinth and among them are six surnames which appear more than once, suggesting that some local families lost more than one member during the conflict.

The fallen of the Second World War have their names inscribed onto the plinth itself.

Esher is a town in the Borough of Elmbridge in Surrey, approximately 14 miles south-west of London, best known perhaps as the home of Sandown Race Course, although other local places of interest include Wayneflete Tower and Claremont House and Gardens. Dating back to the early eighteenth century Claremont House is now the home of Claremont Fan Court School, but it was once a royal residence and a particular favourite of Queen Victoria and her family. During the First World War, the building was used as a hospital for wounded officers.

R C Sherriff spent a great deal of his life in Esher, living in his beloved house, Rosebriars. During this time he became a somewhat reluctant local celebrity, although hampered by extreme shyness and nerves. He took a keen interest in the arts and harboured hopes that, upon his death, his home and its six acres of grounds, would be turned into an art centre. Unfortunately, this was not to be, although the property was sold and the money raised was used to create the Rosebriars Trust. This is a charitable organisation with the aim of advancing and developing the arts of the Borough of Elmbridge.