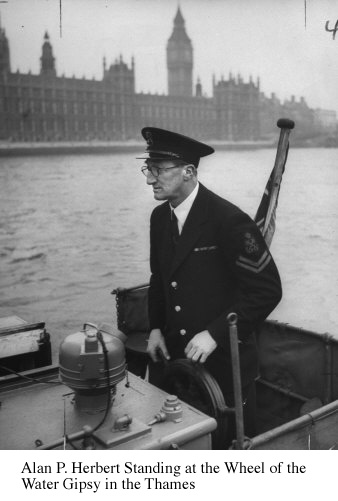 Alan Patrick Herbert was born on September 24th 1890, at Ashtead in Surrey, the oldest of the three sons of Patrick and Beatrice Herbert (née Selwyn). His father’s job, as a civil servant at the India Office ensured a comfortable and happy childhood for Alan and his two younger brothers, Sidney and Owen. However, their idyllic childhood ended in 1898, when their mother died from consumption aged just 33 and the care of the three boys fell to their housekeeper, Amelia Deacon.

At the age of nine, Herbert was sent to a preparatory school called The Grange, at Folkestone in Kent, moving on to Winchester College in 1904, where one of his contemporaries was the future war poet, Robert Nichols. Herbert moved up to New College, Oxford in October 1910, having first published several poems in Punch Magazine during the previous summer. He also began working at Missions for the poor, which work he continued while at Oxford, where his contemporaries included the Prime Minister’s son, Cyril Asquith and Francis Newbolt, the son of Sir Henry Newbolt. Having graduated with a First in Jurisprudence, Herbert was staying with the Newbolts at their home at Netherhampton, in Salisbury, when the First World War was declared and he enlisted as an Ordinary Seaman in the Royal Naval Reserve on 5th September 1914.

In the meantime, Herbert had also fallen in love, with Gwendolen Quilter, and the couple were married on December 31st 1914 at St James Church, Bethnal Green. Theirs was a long and happy marriage and they had four children: three daughters (Crystal, Jocelyn and Lavender) and a son named John. However, the First World War had already claimed the first of many friends and family, when Herbert’s youngest brother, Owen, was killed on 27th October 1914, while serving as a Second Lieutenant in the 23rd Brigade of the Royal Field Artillery.

Herbert himself was quickly promoted, first to Leading Seaman and then to Temporary Sub-Lieutenant and he joined Hawke Battalion when it sailed for Gallipoli on 10th May 1915. He enjoyed the unconventional nature of the Royal Naval Division, which stuck to naval traditions, despite its service on land, and refused to adhere to army regulations.

Herbert continued to write poetry, which was again published in Punch, but once in Gallipoli, he developed a severe digestive disorder and was invalided back to England in August 1915, to find that his father had died in his absence (on June 14th). He and Gwen rented a house at 12 Hammersmith Terrace, backing on to the River Thames, enabling Herbert to fuel his love of the water and boating.

By the time Herbert rejoined his battalion, they had returned from the disastrous Gallipoli campaign and were serving on the Western Front. He was promoted to Assistant Adjutant in July 1916, which kept him out of the fighting during the Battle of the Ancre in November 1916, during which Hawke Battalion suffered catastrophic losses, with 400 casualties out of 435 men. The whole division suffered similarly and was withdrawn for major re-structuring, returning to the front in January 1917. Herbert then remained at the front, keeping his men in good humour and refusing (as usual) to conform, until he was wounded in April 1917. While recovering in England, he wrote his semi-autobiographical account of the war, Secret Battle, which was published in 1919, to great acclaim. Herbert only returned to fighting one month before the armistice, which was declared while he was serving in Algeria.

After the war, Herbert joined the staff at Punch Magazine, where he wrote satirical articles on the legal profession. He also wrote novels, musicals, comic operas and plays, some of which were performed at the Lyric Theatre in London.

In 1935, Herbert successfully stood for parliament in the Oxford University seat, as an independent candidate. He made his mark in the House of Commons, with the passing of the Matrimonial Causes Act (also known as the Herbert Act) of 1937, which simplified divorce proceedings.

During the Second World War, Herbert served as a Petty Officer in the Royal Naval Auxiliary Patrol, which formed part of the London defences on the River Thames. In May 1941, however, Herbert lost his only surviving brother, Sidney, who had been serving as an Engineering Officer aboard HMS Hood, which was sunk by the German battleship, Bismarck. Gwen served throughout the war as an ambulance driver, despite her husband’s absence and the fact that their house was bombed twice.

In 1945, Herbert was knighted and continued to serve in parliament until 1950 when the University seats were abolished. In his later years, he became irritated by those who attempted to provide a different – and in his mind, inaccurate – representation of the First World War. Among his targets was the Joan Littlewood Theatre Workshop production of Oh What a Lovely War, which Herbert accused of trivialising his past.

In common with many who served, the First World War would remain a subject dear to his heart throughout Herbert’s life as he was haunted not only by his experiences, but also by the friendships made and lost during the conflict. It seems, therefore, somehow appropriate that, when Alan Herbert died in 1971, the date of his death should have been 11th November: the day on which so many people remember the sacrifices made by the young men of his generation.