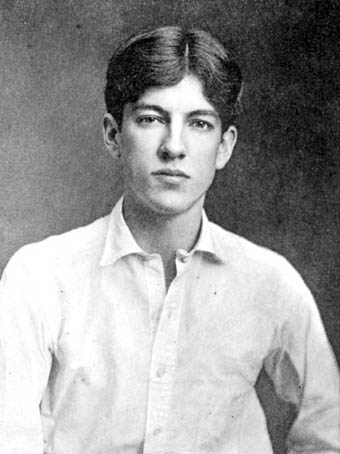 Alan Seeger was born in New York on 22nd June 1888, the second of three children born to Charles and Elsie Seeger. The following year, the family moved to Staten Island, where they lived for the next nine years and where Alan attended the Staten Island Academy. Alan was always a dreamy, somewhat romantic child, who enjoyed his leisure time, staring out at the Atlantic Ocean and dreaming of adventures.

When Alan was ten, the family moved to Mexico, a country which opened his eyes to many new and romantic wonders. The family took to producing a magazine to which Alan contributed essays, articles and poetry. Two years later, when the family returned to New York, Alan was enrolled at the Hackley School, overlooking the Hudson River. In 1906, he entered Harvard, where he settled after a difficult first few months, becoming editor of the Harvard Monthly and graduating with an Honours Degree in Celtic Literature.

After his graduation, Seeger became disaffected with his life, moving away from home to Greenwich Village, where he wrote poetry and lived on money borrowed from friends. His parents were concerned about his lifestyle and in reality, Seeger himself was far from happy. No one was very surprised, therefore, when he moved to Paris in 1912, seeing beauty and romance to nurture his poetry. He settled quickly in the Latin Quarter and within two years had accumulated sufficient poetry to contemplate publication. Despite his enthusiasm, however, no publishers were interested in his work, so in the summer of 1914, he travelled to London taking his manuscripts with him in hope of better luck. Seeger’s father visited him while he was in London and, although Seeger failed to find a publisher, he returned to France on July 25th more settled and happy than when he had arrived.

Within a month, on August 24th, Seeger had joined the French Foreign Legion, following the declaration of the First World War. Seeger, along with approximately forty other Americans, chose this route because he was unable to swear allegiance to the French flag. Initially, Seeger was enthusiastic for army life, being assigned to C Battalion, 1st Company, 3rd Section of the 2nd Foreign Regiment, beginning his training at Toulouse.

In October, Seeger was sent to the trenches, where his eagerness was soon checked by the conditions he discovered there. He enjoyed the company of his comrades but hated “being exposed to all the dangers of war… with none of its enthusiasm or splendid élan.”

During the spring and summer of 1915, Seeger’s regiment was moved several times, so he never had the opportunity to settled. In September 1915, his unit took part in the Battle of Champagne and then in February of the following year, he became ill with a serious bout of bronchitis, which kept him out of the trenches until the following May.

On 1st July 1916, the Battle of the Somme commenced and on the 4th of that month – American Independence Day – Seeger’s unit went over the top, attacking the village of Belloy-en-Santerre. Seeger’s group was caught in machine-gun fire and he was hit several times before he fell. As waves of fresh troops poured forward, Seeger could be heard cheering them on to victory. Seeger’s body was found and buried the next day, but after the war, as so many battles had taken place over the same ground, his grave could not be found and he was officially listed as missing. He was posthumously awarded the Croix de Guerre and the Medaille Militaire. In the 1920s the French concentrated all their burials into large national military cemeteries and in 1982 it was revealed that Alan Seeger is buried at No. 1 Ossuaire at Lihons Cemetery.

The Seeger family paid for the bells in Belloy’s church “so that the voice of Alan Seeger can call out across the Somme forever”. Alan Seeger was not under any obligation to fight. America did not enter the war until 1917, by which time Seeger was already dead. He chose to fight, quite simply because he believed it was the right thing to do.