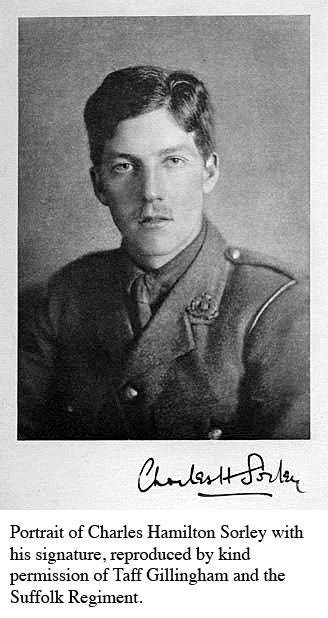 Charles Sorley was born on May 19th, 1895 in Aberdeen, where his father, William Ritchie Sorley was professor of moral philosophy at the university. In 1900, the family, including Charles’s twin brother, Kenneth and their older sister Jean, moved to Cambridge, where their father took up a new position and was elected a Fellow of King’s College.

Until the age of nine, Charles and Kenneth were taught at home by their mother, Janetta. The boys then entered King’s College choir school. At the age of 13, Charles won a scholarship to Marlborough College, where he did well and in 1914 obtained a scholarship to University College, Oxford.

Before starting at University, Sorley travelled in Europe, spending several months in Germany. When war was declared, he was on a walking tour and found himself placed under arrest for one night. Upon his release, he hastily returned to England and enlisted.

As a Scot, Sorley was not especially patriotic towards the much vaunted ‘English Cause’, but he still believed it to be his duty to serve and was gazetted as a Second Lieutenant in the 7th Battalion, Suffolk Regiment on August 26th 1914, a little over three weeks after the war had begun.

By May 1915, he was fully trained and embarked for the Continent, where he served at Ypres and, by August had been promoted to the rank of Captain. The following month saw the beginning of the Battle of Loos, which proved costly and disastrous for the British, who having initially pulled back, decided to re-launch their offensive on October 13th. During this attack, Charles Sorley was shot in the head and died instantly. He was twenty years old.

His body was never found and he is now commemorated, along with over 20,000 others, on the Loos Memorial to the Missing at Dud Corner Cemetery.

After his death, his many poems were gathered together in a publication entitled Marlborough and Other Poems, which was published in 1916. Many poets, including Robert Graves, believed that Sorley was among the finest of the war poets and his death has come to represent the loss of youth and promise.