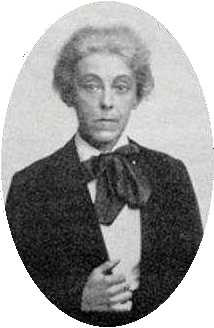 Charlotte Mary Mew was born on London on 15th November 1869, the third child of architect Frederick Mew and his wife Anna Maria Marden (née Kendall). Charlotte’s mother firmly believed that she had married beneath her and throughout her marriage, despite having seven children, she did very little around the home. The children, Henry, Frederick, Charlotte, Richard, Caroline (known as Anne), Daniel (known as Christopher) and Freda, were cared for by their nurse, Elizabeth Goodman.

Charlotte’s childhood and young adult years were ones of great tragedy and upheaval. In 1876, Christopher, then only four months old, died from “convulsions” and later the same year, Richard, aged five, succumbed to scarlet fever. Henry, the oldest of the children, was committed to a lunatic asylum in 1888, followed by the youngest child, Freda in 1897.

Throughout these unhappy times, Charlotte was educated at The Gower Street School, which was run by Lucy Harrison and in 1894, published her first story, named Passed in The Yellow Book – An Illustrated Quarterly.

In 1898, Charlotte’s father died from stomach cancer and, having always been an extravagant man, he left no capital to the surviving members of his family. Anne had become an artist, so she turned her hand to restoring paintings and antique furniture, while Charlotte continued to write: her stories and poems being published in various magazines and periodicals.

Charlotte’s oldest brother, Henry, died in the Peckham House Lunatic Asylum in 1901 and, unsurprisingly, this series of unhappy events began to take their toll. Charlotte experienced deep feelings of sorrow, helped only by Anne – always the more optimistic of the two sisters – who was her constant companion. Charlotte occasionally travelled alone, leaving Anne to care for their domineering and demanding mother. In 1902, she went to Paris to visit fellow writer, Ella D’Arcy, with whom Charlotte was in love. Ella, however, did not reciprocate these feelings and Charlotte returned to London disappointed and dejected.

Few of Charlotte and Anne’s 20th century friends knew of their earlier tragedies and by 1909, Charlotte’s work was becoming more well known. She gave poetry readings and was more widely published, gaining critical acclaim for her work. However, in 1913, Charlotte suffered a further personal unhappiness when she met fellow writer May Sinclair. The two became close friends, but when Charlotte made romantic advances, May rejected her and, to make matters worse, it is alleged that May publicly humiliated Charlotte over her actions.

Luckily, many of Charlotte’s true friends ignored the potential scandal and embarrassment caused by this episode and continued to support her work. Harold Monro of the Poetry Bookshop was one such champion and through him, Charlotte was introduced to Sydney Cockrell, Thomas Hardy and Siegfried Sassoon, who often cited Charlotte as his favourite female poet. When Sassoon first met Charlotte in June 1919, he realised that the two sisters had little money and an elderly mother to support, so he offered Charlotte paid work, writing reviews for the Daily Herald, of which he was the Literary Editor.

In December 1922, Charlotte’s mother died, leaving the two sisters, now in their 50s, to themselves. They lived quietly, their financial hardship eased by the award of a Civil List Pension to Charlotte. This award was achieved after Thomas Hardy, John Masefield and Walter de la Mare had lobbied the relevant authorities to recognise the quality of Charlotte’s work.

Finally, in June 1927, there came a tragedy from which Charlotte could not recover: Anne died from cancer. Grief overwhelmed Charlotte: she rarely slept and she became convinced that Anne had been buried alive. Seven difficult months later, she was admitted to a nursing home where it was hoped that her nervous disorder could be treated. On 24th March 1928, Charlotte took her own life by drinking half a bottle of disinfectant. At the inquest into her death, the doctor said that, following Anne’s death, Charlotte had become convinced that she was surrounded by germs and she believed that these had killed her sister.

Described in one obituary as a “poet of rare quality”, Charlotte Mew never really appreciated her talents, having a low opinion of her own abilities. The literary world, however, mourned her loss, hoping that, perhaps in death she had found peace and had escaped from her disillusionment and loneliness.