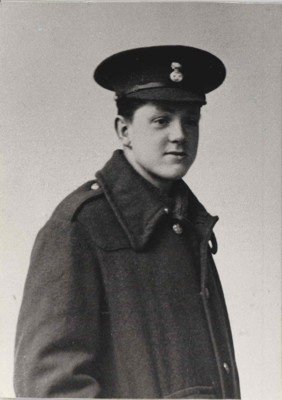 Walter David Michael Jones was born in Brockley, Kent on November 1st 1895, the youngest of the three children of printer’s overseer, James Jones and his wife Alice (née Bradshaw). James Jones was of Welsh descent, having been born at Holywell in Flintshire, although he had lived in or near London for several years and his wife came from Rotherhithe.

David, as he became known, took an early and keen interest in art and entered several competitions and exhibitions as a child. At the age of fourteen, he joined the Camberwell Art School, where he realised that his future lay in the world of fine art. Despite this keen interest, however, Jones was uncertain as to exactly what direction he should follow, although this problem was temporarily set aside with the outbreak of the First World War, when he enlisted as a private in the Royal Welsh Fusiliers, embarking for France on 2nd December 1915.

Jones saw action on the Somme, taking part in the attack on Mametz Wood on 10th and 11th of July, during which he was wounded in the leg and invalided back to England. He returned to France in October 1916, but was sent back to England permanently in February 1918, suffering from severe trench fever and was demobilised on January 15th 1919.

After this, Jones accepted a grant to work at Westminster School of Art. In 1921, he converted to the Roman Catholic faith and began working with Eric Gill, who shared many of Jones’s religious and artistic opinions.

In 1927, Jones began writing In Parenthesis, although it was not published until ten years later, with an introduction by T. S. Eliot. Critics find it difficult to categorise In Parenthesis as it seems to be neither poetry nor prose; it is almost two hundred pages long and is written in seven parts in the form of a journey.

Jones also painted and exhibited in both Europe and America, as well as around Britain. In 1952, a second book, The Anathemata was published. Jones also wrote several essays on the subjects of art, history and literature.

Although Jones lived alone, he was not a lonely man and was highly thought of by his many friends, who respected his sense of humour, his generous spirit and his vast knowledge. Despite this, he lived in poverty and suffered at least two serious breakdowns, as well as chronic insomnia. Jones died on 28th October 1974 at Harrow in Middlesex.