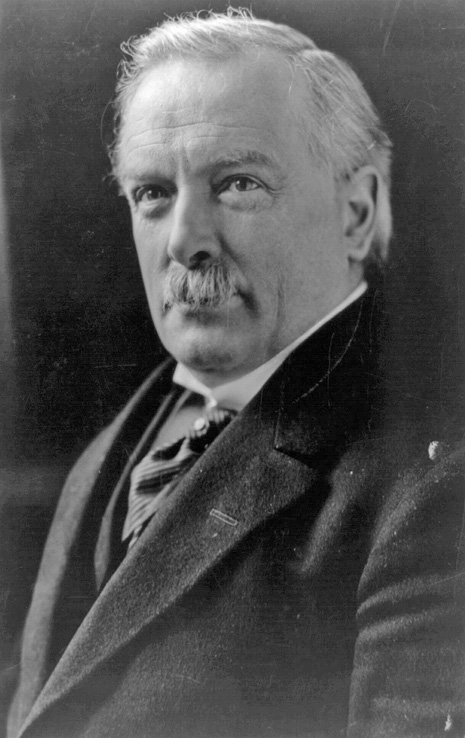 David Lloyd George was born in Manchester on January 17th 1863, the son of William, a schoolteacher, and his wife Elizabeth. The following year, William died, so Elizabeth returned to her native Wales, where the family lived with her brother, Richard.

Lloyd George began his career as a lawyer, but soon turned his attention to politics, taking a keen interest in the policies of the Liberal party. In January 1888, he was married to Margaret Owen and two years later, won the election for Caernarvon Boroughs, becoming the youngest Member of Parliament. He soon became renowned for his skilled oratory and achieved national fame when he spoke out against British involvement in the Boer War.

When H. H. Asquith became Prime Minister in 1908, Lloyd George was appointed Chancellor of the Exchequer, and devised the ‘People’s Budget’ of 1909, which called for higher taxes on the rich. This budget was rejected by the House of Lords, resulting in the Parliament Act of 1911, under which the powers of the Upper House were severely reduced.

When the First World War began, Lloyd George served in Asquith’s coalition government, firstly as Minister for Munitions and then as Secretary for War. As the conflict progressed, Lloyd George and others became increasingly disaffected with Asquith’s leadership and in December 1916, Lloyd George used Conservative support to take over the position of Prime Minister and cause a permanent rift in the Liberal party.

He immediately formed a War Cabinet, which consisted of himself and one other Liberal (Lord Milner), two Conservatives (Andrew Bonar Law and Lord Curzon) and one representative of the Labour party (Arthur Henderson). Lloyd George came into frequent conflicts with Commander in Chief, Sir Douglas Haig and conspired to reduce the power of many of the generals, enforcing several changes in leadership. After the war, Lloyd George immediately called a General Election, which his coalition with the Conservatives won by a landslide, although within the coalition itself, the Conservatives had the balance of power. After the Treaty of Versailles had been signed, he settled down to more domestic politics.

In June 1922, the Conservatives, keen to take power by themselves, showed that he had been selling peerages and knighthoods and in October of that year the coalition was abandoned and Lloyd George was forced to resign.

In the 1930s he published his memoirs, in which he was scathing towards the Generals, especially Douglas Haig, being dead by this time, had no right of reply. Margaret, his wife, died in 1941 and Lloyd George then married his long-term mistress, Frances Stevenson, much against the wishes of the five children whom he had had with Margaret.

David Lloyd George died of cancer in March 1945 and was buried beside the river Dwyfor in Llanystumdury, where he grew up.