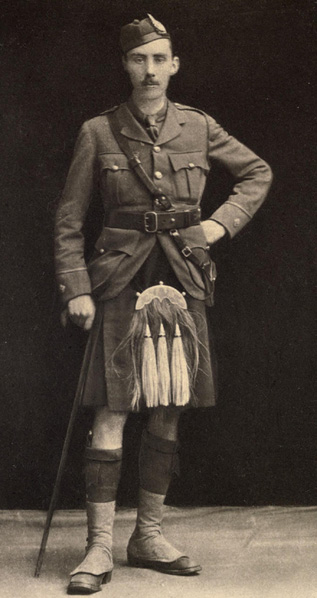 Ewart Alan Mackintosh was born on 4th March 1893 in Brighton, Sussex, the son of Scotsman Alexander Mackintosh and his wife, Lilian. From this and Alexander’s first marriage, Alan (as he was known from an early age) had one half brother and five sisters and half sisters. Alexander Mackintosh worked as a banker and Senior Official Receiver and the family lived in a large Regency house at Sussex Square in Brighton with a governess and several servants. Alan Mackintosh attended Brighton College, where he excelled academically, especially in English and Classics, although, unlike most boys at the time, he despised sports.

In 1910, Mackintosh moved to St. Paul’s School in London, where he extended his activities to include poetry and drama, as well as editing the school magazine. He was extremely popular with his fellow students, who greatly appreciated his sense of humour. In 1912, Mackintosh won a scholarship to Christ Church, Oxford where, taking a keen interest in his Scottish ancestry, he learned to speak Gaelic and play the bagpipes.

Upon the outbreak of the First World War, Mackintosh immediately abandoned his studies, enlisting in the Seaforth Highlanders. He was commissioned as a Second Lieutenant and sent for training at Golspie in the Scottish Highlands. Here, Mackintosh found himself among a particularly close-knit group of men, the battalion (the 5th Sutherland and Caithness Highlanders) having been formed by the Duke of Sutherland, and being made up of many men who worked on his estate. Mackintosh enjoyed this friendly atmosphere, but was less enamoured with the rigours of army life. After additional training in Bedford, the Seaforths finally embarked for France in July 1915 and Mackintosh was soon appointed Battalion Bombing Officer. He felt rather homesick to start with, but kept his thoughts to himself, only revealing his true emotions in his poetry, which he continued to write.

In September 1915, Mackintosh experienced a battle for the first time at La Boiselle, which was followed by a harsh winter in the trenches. Spring 1916 found Mackintosh positioned just to the north of Arras, where the trenches were terrible, having been dug-in over previous battlegrounds, exposing bodies from earlier engagements. A raid took place on May 16th, in which Mackintosh and Second Lieutenant Mackay led a party of men across No Man’s Land to the German trenches. During the course of this raid, a nineteen year-old private named David Sutherland was badly wounded and Mackintosh picked him up to carry him to safety. After some time, however, it became clear that Sutherland had died and, reluctantly, Mackintosh was forced to leave his body behind in order to help other wounded men. This episode provides the inspiration behind Mackintosh’s poem In Memoriam and his courage on that day earned him the Military Cross, the citation for which read:

“For conspicuous gallantry. He organised and led a successful raid on the enemy’s trenches with great skill and courage. Several of the enemy were disposed of and a strongpoint destroyed. He also brought back two wounded men under heavy fire.”

The poem, which is arguably one of the most moving of the war, demonstrates Mackintosh’s understanding of the grief experienced by a parent, but also his own sense of responsibility as the men’s officer and, therefore, father-figure. He says nothing of his own heroic deeds that day, but speaks of the trust between the men and himself, as well as his feelings of helplessness, as he could do nothing to prevent the deaths that took place: even though he had been responsible for saving two lives.

In July, during an attack at High Wood, Mackintosh was badly gassed and hospitalised in England. The period of recovery was slow, taking six months and, as time progressed, Mackintosh became more and more overwhelmed by his feelings of guilt, that he was safe in England, while his men were still in danger. He found the lack of understanding amongst civilians almost intolerable and it was during this time that he wrote his poem Recruiting, as a response to the attitude that he experienced on the home front.

Once fully fit, Mackintosh was sent to the Officer Cadet Battalion in Cambridge, where he passed on his expertise as a bombing officer to young recruits. This did nothing to assuage his feelings of guilt, but while there he met and fell in love with a young doctor named Sylvia Marsh and they made plans to marry. Eventually, however, despite his new-found love, he could bare the guilt no longer and applied to return to France, which he did at the end of September 1917.

A month later, he wrote a poem entitled To Sylvia, in which he asks his beloved to forgive his decision, but explains that he had felt that he was betraying his “dead friends” by remaining safe. Now that he is back facing the same dangers, however, he says that he feels he can look them “in the face” again. Exactly one month after writing this, Mackintosh was killed, on November 21st 1917, on the second day of the Battle of Cambrai. He is buried at Orival Wood Cemetery at Flesquieres.

E. A. Mackintosh stands out among the soldier-poets. This is not because his poetry is especially fine or lyrical: it isn’t. It is actually because of the man behind the poetry; a great man who didn’t fight because of loyalty to King and country or for his beloved Sylvia, or because of any sense of duty, other than a deep and abiding love for his men. His guilt at leaving them drove him back to his death, but one senses that he would have preferred that outcome to a lifetime of safety at their expense. Despite his own heroics, his poetry is “not about heroes”, war or pity: it is just about love.