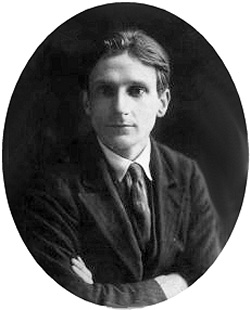 Edmund Charles Blunden was born on London on November 1st 1896, the oldest child of headmaster Charles Blunden and his wife, Margaret (née Georgina Margaret Tyler). After the arrival of two more children, the Blundens moved to Yalding in Kent, where Charles became headmaster of the local village school. Edmund passed a very happy childhood here and a further six children were born to Margaret, to whom Edmund was devoted.

Blunden began his senior education at Cleaves Grammar School in 1907, before winning a place at Christ’s Hospital in Horsham, West Sussex, which he attended as a boarder from 1909. Although homesick, Blunden was desperately keen to succeed, and worked hard, publishing his first poem in the school magazine in 1913.

When the First World War began, Blunden completed his final year at school, gaining a scholarship to Queen’s College Oxford, which he duly postponed in favour of a commission in the Royal Sussex Regiment. Following his training, Blunden embarked for France in the spring of 1916, where his battalion saw action on or around the Somme battlefields during that summer. In November, just as the battle was coming to a close, Blunden was awarded the Military Cross for his part in a reconnaissance mission, the citation for which read as follows: “For conspicuous gallantry in action. He displayed great courage and determination when in charge of a carrying party under heavy fire. He has previously done fine work.” Blunden also saw action at Passchendaele in 1917 and then in 1918 was posted to a training camp near Stowmarket in Suffolk.

Despite Blunden’s feelings of guilt over this “safe” posting, he found some compensations: namely a whirlwind romance with blacksmith’s daughter Mary Daines, whom he married in June 1918. By the time Blunden returned to France, the war was actually over and Mary was also pregnant, so he was pleased to be demobilised in February 1919. Blunden’s place at Oxford still awaited and to fill the time until October, he focused on his poetry. In May he wrote, enclosing some poems, to Siegfried Sassoon, newly appointed literary editor of the Daily Herald. Sassoon responded favourably, the two men met and a lifelong friendship began, out of which Blunden was introduced to many other literary figures.

In July 1919, Mary gave birth to a daughter named Joy, who sadly died when only a few weeks old. Both parents were devastated and Blunden threw himself into his work, going up to Oxford as planned in October, where he met Robert Graves, John Masefield, and Robert Nichols. His time at Oxford was cut short, however, when Mary became pregnant again and he had to find work, editing the journal Athenaeum. Another daughter, Clare, was born in October 1920, followed by a son, John two years later, but by now Blunden’s marriage was under severe strain. When Blunden was offered the position of Professor of English at Tokyo University in 1924, he accepted, leaving Mary and his children behind.

While in Japan, Blunden began writing his memoir Undertones of War and also had an affair with his secretary, Aki Hayashi, who returned with him to England at the end of his contract in 1927, although by then their affair had ended. Mary, however, had also met someone else and, upon Blunden’s return, she announced her intention to leave him.

Blunden, again, threw himself into his work, completing Undertones of War and two volumes of poetry, his stretched finances assisted by a gift of £50.00 per month, given to him by Siegfried Sassoon. Blunden’s divorce from Mary was finalised in 1931, after which he began teaching English at Merton College, Oxford. He also compiled the poems of Wilfred Owen and wrote a biography to accompany them for publication, bringing Owen’s work to the attention of the general public.

While at Oxford, Blunden met and married writer Sylva Norman in 1933 and in 1936 he was appointed as an advisor to the Imperial War Graves Commission. At the beginning of the Second World War, Sylva joined the forces and, in her absence, Blunden began a romance with an undergraduate named Claire Poynting. When Sylva heard about this affair, she returned to Oxford, proposing an uneasy compromise, whereby she would remain Blunden’s wife, but allow him to continue seeing Claire. The strain of this situation soon became too much and eventually Blunden and Sylva were divorced and he married Claire in May 1945, by which time he had left Oxford to work at the Times Literary Supplement.

In 1946, Claire gave birth to the first of four daughters, named Margaret, and the following year, Blunden accepted a Foreign Office position in Japan, where the family lived for the next three years and where two further daughters – Lucy and Frances – were born. Upon their return to England, Blunden was awarded the CBE in 1951 and resumed his work at the TLS. In 1953, Blunden collaborated with composer Gerald Finzi to produce a collection of poems by Ivor Gurney, whom both men greatly admired.

The next eleven years were spent as Head of English at the University of Hong Kong, where Blunden’s final daughter, Catherine, was born. When they returned to England in 1964, the family settled at Long Melford in Suffolk. Two years later, Blunden was elected Professor of Poetry at Oxford University, although he was forced to resign from this position after two years due to ill health, following which he became a virtual recluse. Blunden died peacefully in bed on 20th January 1974. At his funeral, Private A F Beeney, a runner from Blunden’s battalion, dropped a wreath of poppies onto the coffin.

Edmund Blunden is generally acknowledged to have spent more time in the trenches than any other major poet of the First World War. He remained deeply troubled by his experiences during the conflict but his words, both poetry and prose, often reflect a more positive perspective. While Blunden may not have been keen to go, he nonetheless tried to focus on nature and the countryside and, above all, the comradeship of those with whom he felt privileged to have served.