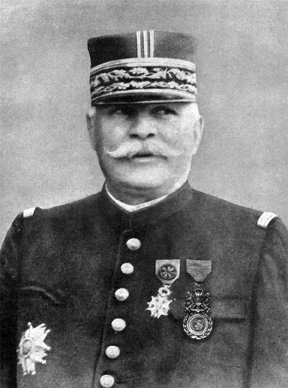 Joffre took part in the Siege of Paris during the Franco-Prussian War (1870-71), but then spent a great deal of his career overseas in the French Colonies, serving as an engineer. Upon his return to France, he was made Commander in Chief in 1911, despite a total lack of experience for this role. Probably due to this inexperience, Joffre readily adopted and steadfastly adhered to Plan XVII, which had been devised ostensibly by Ferdinand Foch. The plan, to attack Germany directly and reclaim Alsace and Lorraine, failed and although the French rallied at the Battle of the Marne, heavy losses in 1916 on the Somme and at Verdun, saw Joffre replaced by General Robert Nivelle in December of that year. Although he remained popular and was appointed Marshal of France, Joffre’s military career was effectively over. He died in January 1931.