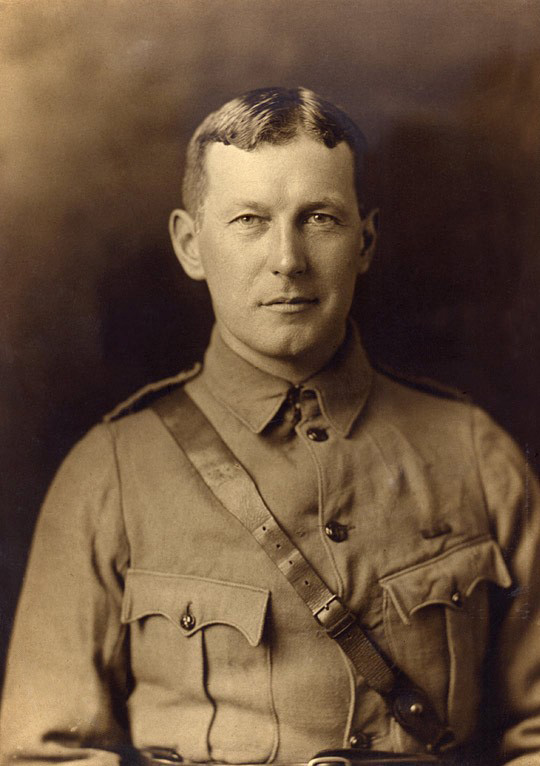 Born on 30th November, John McCrae was the second son of Ontario-based Lieutenant-General David McCrae and his wife Janet Simpson Eckford. John’s early education took place at the Central Public School and then at Guelph Collegiate Institute, where he took his first steps into the military, joining the Highland Cadet Corps at the age of fourteen. Academically, John was a high achiever and was the first student from the town of Guelph to be awarded a scholarship to the University of Toronto.

In 1892, ill-health forced McCrae to take a whole year out of university and this recurring asthma would plague him intermittently for the remainder of his life. During this year, he met and formed a close attachment to the 18-year old sister of one of his friends, but she tragically died before the relationship could really develop. When McCrae returned to Toronto in 1893, he was relieved to leave this troubled time behind and resume his studies. McCrae completed a BA in Natural Sciences, before commencing his medical training, qualifying as a doctor in 1898, at the age of twenty-six, when he graduated at the top of his class. Within a year, McCrae had joined his older brother, Thomas, working at the Johns Hopkins Hospital in Baltimore.

In 1899, McCrae was awarded a fellowship in Pathology at McGill University in Montreal, but postponed this in order to enlist in the Army and participate in the Boer War. He joined D Battery of the Royal Canadian Artillery, sailing for South Africa on January 20th 1900. Once arrived, McCrae was caught up in some fierce fighting, but also visited a military hospital, where he found the conditions to be quite appalling. In 1901, McCrae was promoted to Captain and his unit returned to Canada, where he was praised for his conduct. In 1902, he was again promoted, to the rank of Major, finally resigning his commission two years later.

Once back in Canada, McCrae had resumed his position at McGill University and also undertook a year of study in Britain before gaining his qualifications from the Royal College of Physicians, enabling him to set up his own practice in Montreal in 1905. Years of professional success and recognition followed, but this was not mirrored in McCrae’s personal life and despite several romances, this eligible bachelor never married.

McCrae made several visits to Europe during this time and was on board a ship bound for England when the First World War was declared. Canada swiftly followed Great Britain in declaring war on Germany and McCrae sent home a telegram offering his services to the Canadian Forces, either as a doctor, or an artillery officer. Arriving back in Canada in September 1914, he was appointed Brigade Surgeon with his old rank of Major.

McCrae set sail for England again on October 3rd 1914, taking with him a horse named Bonfire. Upon arrival, he spent several months in training before embarking for France in February 1915, where he took part in the Battle of Neuve Chapelle. Then in April 1915, McCrae’s unit was moved to the Ypres Salient, where the Germans first employed chlorine gas. In the Second Battle of Ypres, over 60% of the Canadian troops who participated were either killed or wounded.

On May 2nd, one of McCrae’s close friends, Lieutenant Alex Helmer was killed by shellfire. McCrae took charge of a hastily convened funeral service that saw Helmer buried in a make-shift grave just behind the lines, where wild poppies were beginning to flower between the growing number of wooden crosses. This scene, coupled with his feelings, inspired McCrae to write his poem In Flanders Fields, which was reputedly composed the following day.

As the fighting continued through the summer, McCrae was transferred to the Canadian Army Medical Corps and was promoted to the rank of Lieutenant-Colonel. He was made Chief of Medical Services at No 3 Canadian General Hospital near Boulogne.

In Flanders Fields was published anonymously in Punch Magazine on 8th December 1915 and was an instant success, touching the hearts of millions. However, such a long period of service in France was beginning to take its toll on McCrae’s health. After the Battle of the Somme, he was hospitalised at Wimereux, suffering from severe asthma attacks. He had a short period of leave in England, but was back in France in time to treat the wounded from the Battle of Vimy Ridge in April 1917.

There followed a summer of very heavy fighting at Passchendaele and, once again, McCrae’s health faltered, until in January 1918 he diagnosed himself as suffering from pneumonia, whereupon he was hospitalised at the Number 14 British General Hospital for Officers. On January 24th it was announced that McCrae had been awarded the position of Consulting Physician to the First British Army, but unfortunately his health continued to deteriorate and four days later, on January 28th 1918, John McCrae died.

He was buried with full military honours at Wimereux Cemetery, with his funeral attended by an impressive list of senior officers, including General Sir Arthur William Currie, the Commander of Canadian Forces, as well as his fellow surgeons and over seventy-five nurses.