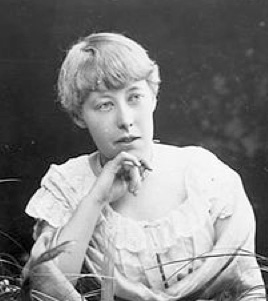 Born on January 23rd 1861 at Whitehall Dairy Farm in Clondalkin, County Dublin, Katharine Tynan was the seventh child of Andrew Cullen Tynan and his wife Elizabeth (née O’Reilly). A Catholic family, which eventually numbered twelve children, the Tynans were dairy farmers, although Andrew Tynan was also an entrepreneur.

Following her education at the Dominican Convent of St Catherine of Siena in Drogheda, Katharine immediately turned to writing, having her first poem published in 1878. She was plagued, however, by eye ulcers, which would eventually lead to extreme short-sightedness. In 1884, Katharine fell in love with Oxford graduate and fellow poet, Charles Fagan who, unfortunately died the following year. The poetry which Katharine wrote at the time gives us a clue as to her heartfelt loss.

Katharine became a prominent member of the Celtic Revival movement, which sought to reinstate traditional Irish values in literature and the arts. She met William Butler Yeats and Charles Stuart Parnell, but shocked her family in 1893 by marrying a Protestant barrister named Henry Albert Hinkson. So outraged were some members of the Tynan family that Katharine was estranged from them and moved to England, where she began writing novels and newspaper articles.

Katharine and Henry had three children: Theobald, Giles and Pamela, before returning to County Mayo in 1911, where Henry was appointed Resident Magistrate. During the First World War, Theobald served with the Royal Irish Regiment, while Giles fought in the Royal Dublin Fusiliers and the publication of Katharine’s poetry led her into correspondence with many other anxious and bereaved families. Despite her fears, Katharine was lucky and both of her sons returned safely from the war. However, tragedy struck just a few months later, when Henry died in January 1919 at the age of 53. Although initially distraught, Katharine eventually rallied and she and Pamela began to travel on the Continent. She continued to write poetry and novels until her death on April 2nd 1931.