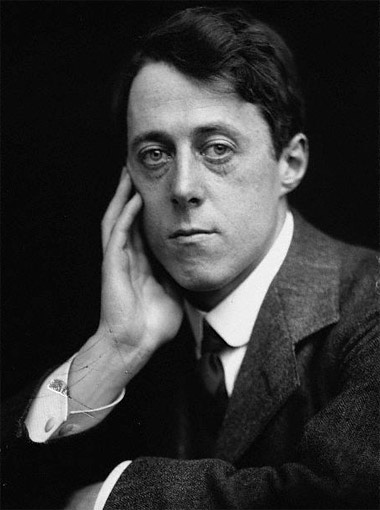 Born in Lancaster on 10th August 1869, Laurence Binyon was the second of the nine children of Frederick and Mary Binyon, who both came from Quaker families and Frederick was the vicar of Burton-in-Lonsdale, Yorkshire. Laurence was awarded a scholarship to St Paul’s School, London and then went on to Trinity College, Oxford. He was a published poet by the age of sixteen and won the Newdigate prize for poetry in 1890.

Following his graduation, Binyon started work at the British Museum, beginning in the Department of Printed Books, before transferring to the Department of Prints and Drawings in 1895. He showed a particular interest in Chinese, Japanese and Indian art and built up the Museum’s collections within these genres.

In 1904, Binyon married Cicely Margaret Prior Powell, who was seven years younger, and the couple went on to have three daughters: twins Helen and Margaret, followed by Nicolete, who was born in 1911. By this time, Binyon had been promoted to Assistant Keeper and the family moved from Tite Street in Chelsea to 118 Belgrave Road, Pimlico.

Having instigated a sub-department of Oriental Prints and Drawings at the British Museum, Binyon became its first Head in 1913. The First World War began in August of the following year and on 21st September, The Times published a poem by Binyon entitled For The Fallen, which contains one of the most quoted verses of poetry ever written. Given the early date of composition and publication, this poem is remarkably prophetic and, when read as a whole, is a haunting tribute not only to The Fallen, but to the author himself.

Although he was to old to enlist himself, Binyon served during the conflict, as an orderly in Military Hospitals in France during 1915 and 1916 and worked for the Red Cross during 1917.

After the war, Binyon returned to the British Museum and wrote numerous books on Oriental art, as well as continuing to publish poetry. He was promoted, once again, to become Keeper of the Department of Prints and Drawings, where he remained until his retirement in 1933. The following year was spent as Norton Professor of Poetry at Harvard University.

Upon his return to England in June 1934, he and Cecily bought a farmhouse in Berkshire and he settled down to writing poetry, although he continued to organise exhibitions of Far Eastern Art. Binyon died on 10th March 1943 and was mourned by those who knew him as a ‘warm’ and ‘happy’ man, who very probably always appreciated that he, unlike so many others, had been allowed to grow old.