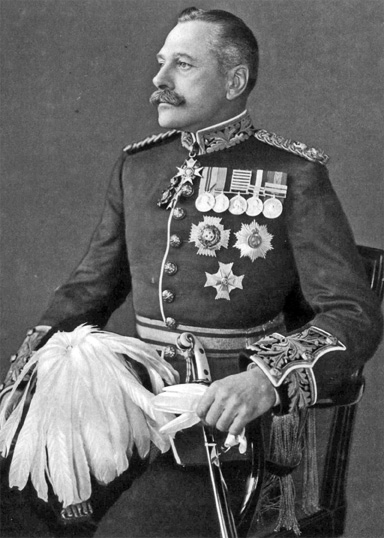 Douglas Haig was born in Edinburgh on June 19th 1861, the youngest of the eleven children of John Haig, the head of the successful whisky distillery which still bears the family name. He was educated at Clifton College in Bristol and Brasenose College, Oxford, leaving university before completing his degree, so as to enroll at the Royal Military College, Sandhurst. Here he completed a one-year course and in 1885, was commissioned into the 7th Hussars.

Following success in India, Haig worked with Sir John French on a new Cavalry Drill Book, as a result of which, in 1896, the High Command decided that he should be permitted to join the Staff College, without sitting the entrance examination, which he had earlier failed. Haig justified this decision, proving to be an excellent student. After this, he left for the Sudan, having been promoted to the rank of Major. In 1898, he returned again to England, where he served under Sir John French at Aldershot. During this time, French borrowed £2,000.00 from Haig, in order to pay his debts, and this loan effectively saved French’s career, although there is some doubt as to whether it was ever repaid.

The two men served together again during the Boer War and by the time of his return to England in 1902, Haig had been promoted to the rank of Lieutenant Colonel. In 1905 he met Dorothy Vivian, a lady-in-waiting to Queen Alexandra, and although he was renowned for his dour and uncommunicative personality, they were married within a month. In 1909, he was knighted and two years later, following another spell in India, Haig was appointed as Commanding Officer at Aldershot.

When the First World War began, Haig automatically became Commander in Chief of the First Corps and he used his position, as well as his social status, to criticise and undermine the abilities of the Commander in Chief of the British Forces, Sir John French. Haig’s criticisms were not without foundation or support and in December 1915, Haig replaced French as the C-in-C of the British Armies in France.

The Battle of the Somme, which began in July 1916, was the first real test of Haig’s leadership. Haig, however, had not wanted to fight on the Somme, preferring the area around Ypres, and also wanted to postpone the battle to allow the many new recruits a little more time to train and prepare themselves. However, he was overruled and the first day of the Battle of the Somme remains the bloodiest in British military history.

During and immediately after the war, Haig was greatly respected by both soldiers and the public, although not within political circles. After the war, while other generals were rewarded by large cash gifts and honorary titles, Haig’s anticipated peerage was delayed until 1919. When a cash sum was eventually offered to him, he refused to accept it until his soldiers had received their pensions. He used his influence to amalgamate several veteran’s associations into the British Legion, which held the first of its annual Poppy Days on 11th November 1921. When Haig died on 28th January 1928, his funeral was attended by tens of thousands of his former soldiers, who still respected him enough to make expensive journeys from all over the country.