The Lady of Loos 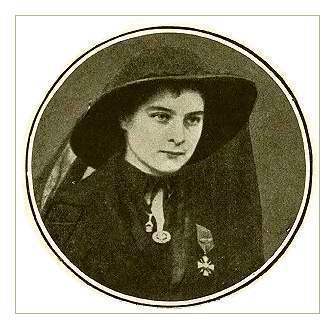 In all of the many stories about the First World War, there have been many accounts of heroic deeds and medals justly awarded, but none is more inspirational or unheralded than the story of Emilienne Moreau.

Born in the summer of 1898, Emilienne grew up with her family in Loos-en-Gohelle, where her father, a retired miner, opened a grocery shop in 1914. In October 1914, the Germans invaded the town and took many of the local men, including Emilienne’s father, as prisoners. As a result of this action and his subsequent treatment, Monsieur Moreau died two months later. Many of the children in the village were in a similar position, having lost their fathers, or sometimes both of their parents and some found their way to Emilienne, who, in February 1915, opened a school in the basement of her family’s home.

Later in 1915, when the British invaded the village of Loos, Emilienne did not hesitate in offering her assistance as a guide for the advancing forces, showing the Allied troops where the Germans had set their defences. Following this, she set up a first aid post and attended to the wounded, with the assistance of British Red Cross men. At one stage, this first aid post came under fire from German snipers, so Emilienne ‘borrowed’ some hand grenades from a British soldier and hurled them in the direction of the firing, killing or wounding all three of the German soldiers who were there. When the house later came under renewed attack from the Germans, she shot two of the advancing soldiers.

As a result of her actions, seventeen year old Emilienne received many medals and accolades, including the Croix de Guerre and the Croix du Combatant from the French authorities. The British awarded her the Military Medal and the Royal Red Cross and, on behalf of the Empire, she received the Venerable Order of St John, which honour is rarely bestowed upon a woman and is a royal order of chivalry, given to those who ‘prevent and relieve sickness and injury’.

Emilienne’s exploits were widely reported in newspapers around the world and she was soon invited to meet French President, Raymond Poincaré and King George V. After the war, Emilienne was married to Just Evrard and in the Second World War, went on to work with British Intelligence and fought in the French Resistance movement, for which she was awarded the title Compagnon de la Libération at the end of that conflict. The latter part of her life was spent in politics and she died in 1971, her story largely forgotten, except by those who were there and remembered the exploits of this unique woman: a heroin, among so many heroes.