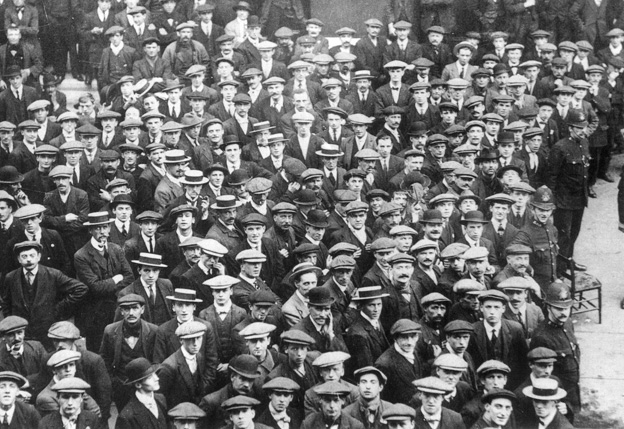 There was a general feeling of relief when war eventually broke out. There had been tension and certainty of conflict for so long, that many people now felt released from this and looked forward to the anticipated ‘adventure’ of war. Most assumed that this would be a short conflict and that it would definitely be over by Christmas. The one dissenter in the British government was the newly appointed Secretary of State for War, Lord Kitchener, who predicted that the conflict would last a minimum of three years and require a huge army of at least one million men.

The British Army, under the command of Field Marshal Sir John French, was the smallest of all the major European powers, but was mobilised on 4th August, with the first troops landing in France just three days later. Young men, aged between nineteen and thirty were being urged to volunteer for the armed forces and swell the ranks of the regular army, now referred to as the British Expeditionary Force (BEF). The initial response to this call to arms, was enthusiastic, but in an effort to offer even greater encouragement, the government advocated that young men should be allowed to train and serve with people who they already knew in civilian life. It was, therefore, suggested that battalions of ‘Pals’ should be formed – made up of men from the same towns, villages, factories, clubs or even football teams. By the end of September, Kitchener had his expanded army.

Across the Channel in Belgium, the German army was facing far greater resistance from ‘Little Belgium’ than had been anticipated as even civilians unexpectedly joined the defence of their country. The Germans did not really know how to manage this situation and some soldiers began to carry out reprisals against civilians, some of which were violent and occasionally involved women and children. Such atrocities soon led to the portrayal of the German soldiers as the ‘Monstrous Hun’, in newspapers throughout Europe. This propaganda tool was a gift to Great Britain and exaggerated stories and images of the violence encouraged even more men to enlist – not only to protect Belgium, but also to prevent the Germans from having the same opportunities in Britain.