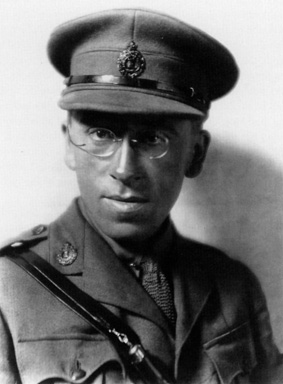 Wilfrid Wilson Gibson was born on 2nd October 1878 at Hexham in Northumberland, one of the nine children of John Pattison Gibson and his wife Elizabeth Judith (née Walton). Wilfrid Gibson’s father was a pharmacist by profession, but was also a part-time writer and historian and while his upbringing was by no means affluent, it was happy. Following a less than remarkable education, Gibson decided to become a professional poet, although his early works were rather unsuccessful and unrealistic studies of ancient legends. He found greater success when he turned his hand to writing about the plight of the poor, working classes. These poems were realistic and the style that he developed would form the basis for his war poetry, proving that a poet does not necessarily have to experience his subject in order to write about it convincingly.

As well as poetry, Gibson went on to write several plays between 1907 and 1912, at which point, he moved south to London, where Katherine Mansfield and John Middleton Murry, editors of the literary magazine, Rhythm, introduced him to other poets, such as Ezra Pound. More importantly, Gibson was also introduced to the patron of the arts, Edward Marsh and, through him, met Rupert Brooke with whom he became great friends.

Although Gibson’s poems were widely read, he was struggling financially, so Marsh helped him by paying him to assist with the editing of Rhythm, as well as publishing several of Gibson’s poems in his new anthology, Georgians. In November 1912, Gibson moved into the bedsit above Harold Monro’s Poetry Bookshop in Bloomsbury, enabling him to meet with even more literary figures, including Robert Frost. Before long, Gibson had also fallen in love, with Monro’s secretary, Geraldine Townshend and the couple were married on 9th December 1913 in Geraldine’s home town, Dublin.

They settled in the English countryside at Dymock in Gloucestershire and here, as well as being visited by Marsh and Brooke, the Gibsons also played host to Frost and his friend Edward Thomas. The “Dymock Group” was soon formed, holding regular meetings and launching a quarterly magazine entitled New Numbers, of which Gibson was the editor.

When the First World War was declared, the Dymock Group broke up, as Brooke enlisted and Frost returned to his native America. Gibson was rejected four times by the recruiting authorities, on account of his poor eyesight, but began writing war poetry, based on letters received from the front and newspaper accounts of battles.

In April 1915 came the dreadful news that Rupert Brooke was dead. Gibson was deeply affected by the death of his dear friend and, along with others, worked to have Brooke’s poetry recognised and praised. Brooke, in turn, made Gibson (together with Lascelles Abercrombie and Walter de la Mare) his literary legatee. This generous gesture ensured that, for Gibson, financial worries were a thing of the past.

In 1917, Gibson embarked on a popular poetry-reading tour of America, focusing on Brooke’s work and, when he returned, he successfully managed to enlist in the army. His poor eyesight meant he would never be sent to the front, but he worked initially as a driver with the Army Service Corps, before transferring to a job as a clerk to a medical officer. He never saw active service overseas and after his demobilisation in 1919 Gibson returned to private life. He and Geraldine had three children: Jocelyn, Michael and Audrey and he continued to write poetry until the 1950s. Gibson died on 26th May 1962, aged eighty-three.

Gibson’s war poetry represents the story of the ordinary soldier and displays his talent for capturing the essence of the working man. He writes so realistically that many critics and anthologists were – and are – convinced that he was a “soldier-poet” writing with first-hand experience of the front-line. Unlike many of the real “soldier-poets”, however, the war did not intrude into Gibson’s life in quite the same way: he did not have the same personal experiences of witnessing at first hand the death of a comrade, or having to kill a fellow human being. Yet the truth and realism shine through in his poetry, as though he had been there, with an authenticity that can be both breath-taking and heart-breaking.