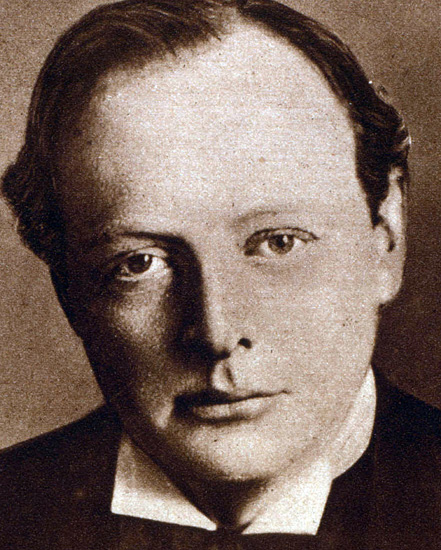 Winston Leonard Spencer Churchill was born at Blenheim Palace, his family’s ancestral home, on 30th November 1874. He was educated at St George’s School, Ascot, Brunswick School in Hove and then Harrow. He attended the Royal Military Academy in Sandhurst, following which he was commissioned as a Second Lieutenant in the 4th Queen’s Own Hussars. He also took the unusual step of becoming a war correspondent which meant he both fought in and wrote about conflicts in India and the Sudan before resigning his commission in 1899 to become a journalist and politician.

Churchill returned to England, following a daring escape during the Boer War, in 1900 and was elected to Parliament that same year. In September 1908, he married Clementine Hozier and they went on to have five children, although one of them, Marigold, died in infancy. By 1914, Churchill’s political career had advanced and he was First Lord of the Admiralty when war broke out. Following the disastrous Gallipoli Campaign, he was forced to resign and went into the army, where he rose to the rank of Colonel, in command of the 6th Battalion, Royal Scots Fusiliers. In 1917, he was recalled by David Lloyd George and made Secretary of State for Munitions.

After the war, in 1924, Churchill was made Chancellor of the Exchequer, although defeat in the 1929 election saw him out of office and he remained in the political wilderness for the next decade. When the Second World War began, he was appointed First Lord of the Admiralty and then in May 1940 he became Prime Minister – an office which he held for the duration of the conflict. In July 1945, he was defeated at the General Election and became Leader of the Opposition until October 1951, when he was once again returned to office.

Churchill retired as Prime Minister in 1955 at the age of 80, although he remained on the back benches until 1964, when he stood down. He died in January 1965 at the age of 90. He was given a state funeral at St Paul’s Cathedral, before being buried at St Martin’s Church, Bladen, not far from Blenheim Palace.