As 1914 faded and 1915 began, the hope that ‘it will all be over by Christmas’ rang a little hollow. In fact, almost all of the Regular Army had been wiped out in the battles of the autumn and early winter of 1914. Despite this, optimism remained high for the early part of 1915; Kitchener’s volunteer armies began arriving in France and Belgium, their enthusiasm undaunted.

During most of the First World War, the majority of battles took place during spring, summer and autumn, so the first weeks of the new year were spent reinforcing old trenches and digging new ones. Troops arrived – not only from Britain, but from all across the Empire – to be greeted by stalemate, cold, water-logged trenches, a lack of supplies and an efficient enemy.

Although there were not so many major battles on the Western Front during the winter months, there were still casualties, as the men constructing and maintaining the trenches often fell victim to sniper fire. There was, however, some fighting in these early weeks, during the Allied Offensive in Artois and Champagne, culminating in the first real ‘battle’ of the year at Neuve-Chapelle, which began on March 10th.

The following month saw renewed hostilities at Ypres, as the German army, led by Eric von Falkenhayn, attempted to reclaim the Belgian town. This battle has become infamous as it marked the first successful use of chlorine gas by the Germans, on 22nd April. Allied troops abandoned their trenches and fled. Those who did not die were severely affected by this new weapon, the success of which surprised even the advancing Germans, who failed to really capitalise on their initial successes.

The British Second Army, led by General Sir Horace Smith-Dorrien, launched counter-attacks, although these were largely unsuccessful. Smith-Dorrien suggested to the Commander-in-Chief of the B.E.F., Sir John French, that British troops should withdraw and found himself ordered back to England. He was replaced by General Herbert Plumer, who promptly made exactly the same suggestion, which this time, French accepted. The Germans continued to attack the town, although by May 24th, they decided to call an end to this offensive, due to a lack of supplies.

At the same time as Plumer’s Second Army were defending Ypres, Sir Douglas Haig’s First Army were attacking at nearby Festubert. This battle, which lasted less than two weeks, saw the Allies advance less than one kilometre, at the cost of 16,000 casualties.

As such, the first half of 1915 on the Western Front, really set the scene for much of what was to follow. The commanders struggled to understand this new type of warfare and the weapons to which it gave rise, arguing amongst themselves as to how they should act. It soon became clear that war was changing, but that the weapons and knowledge required to combat this had yet to be developed.

Although the summer of 1915 is not renowned for any major battles, that does not mean that nothing happened. There were attacks and skirmishes in the Argonne area and the French continued their attempts to regain Vimy Ridge, which had been captured by the Germans in September 1914. The French army made some headway, but the Ridge itself remained firmly in German hands, when the French called off their offensive in November. Their casualties amounted to approximately 150,000 men.

August also saw the beginning of an artillery duel along great stretches of the Western Front, which lasted several weeks, with no perceptible outcome. 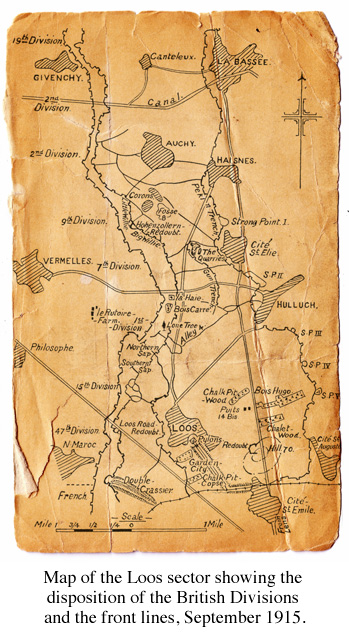 The main British offensive of the second half of 1915 began on 25th September at Loos, following a four day artillery bombardment, which preceded the attack. The British assault was led by Sir Douglas Haig, who had expressed doubts over the timing of the attack, but who had been overruled. Haig was concerned that his artillery lacked sufficient shells; that the troops in question – many of whom were new volunteers – had not had enough training, and that the terrain was unsuitable. Against this, Sir John French, the Commander-in-Chief of the British Forces in France, argued that the German troops were greatly out-numbered by the British and that they should take full advantage of the situation.

On the morning of 25th September, the British released over 5,000 cylinders of chlorine gas. Unfortunately, along some sections of the line, the wind blew the gas back into the British trenches, resulting in over 2,500 casualties. Despite this setback, the British troops made strong advances, capturing Loos itself, before moving on in the direction of Lens. Haig had earlier requested that reserves of troops should be made available for him to call upon on the first day, but this was again overruled by John French. Therefore, the advance had to be halted at the end of the first day, in order that fresh troops could be brought up and, therefore, the early momentum was lost.

On September 26th, the British had to virtually begin their attack again, except that this time, the Germans were much better prepared and there was no artillery protection or support. Advancing troops were cut down by machine gun fire and on 28th September, the British were forced to retreat. Further attacks were launched on 13th October, but again these met with failure and the offensive was abandoned, with the loss of 50,000 British and approximately 25,000 German casualties.

The main effect of this defeat was that Sir John French was deemed ill-suited to his position and was blamed for his failure to have reserve troops at the ready on the first day of the battle. On 10th December, he was replaced as Commander-in-Chief by Sir Douglas Haig.

Rupert Brooke
Having assisted with the evacuation of refugees in Antwerp during October 1914, Brooke sailed for Gallipoli on 28th February 1915. He never reached his destination, as he died en-route, as the result of an infected mosquito bite, on 23rd April – St George’s Day.

Julian Grenfell
Grenfell had served in the Regular army before the war and saw action on the Western Front almost from the very beginning of the conflict. An extremely courageous officer, Grenfell received a shrapnel wound to the head on 13th May 1915 and died on the afternoon of the 26th.

Charles Hamilton Sorley
Having embarked for France in May 1915, Sorley was promoted to the rank of Captain in August and took part in the Battle of Loos. On Wednesday 13th October, Sorley was shot in the head and killed instantly. His body was never recovered and he is commemorated on the Loos Memorial to the Missing at Dud Corner Cemetery.